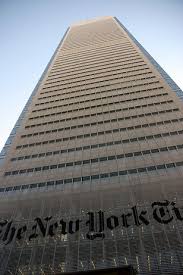 In End Times, Michael Hirschorn of The Atlantic who gazes into his crystal ball and sees the death of The New York Times.

It’s certainly plausible. Earnings reports released by the New York Times Company in October indicate that drastic measures will have to be taken over the next five months or the paper will default on some $400 million in debt. With more than $1billion in debt already on the books, only $46million in cash reserves as of October, and no clear way to tap into the capital markets (the company’s debt was recently reduced to junk status), the paper’s future doesn’t look good.

Your article “End Times” which speculates on whether The New York Times can survive the death of journalism, leaves a lot to be desired from the standpoint of . . . well, journalism.

Granted Hirschorn is being a bit irresponsible because, as he himself admits, the chances that the Times will go under are very slim, but methinks Mathis doth protesteth too much.

The Times is in trouble: The paper recently announced plans to borrow $225m against its beautiful, brand new steel-and-glass 52-story headquarters to deal with a cash crunch of its own making.

You would think that given what’s going on in the industry, the Times would tighten up operations, but American Thinker points out that in March 2007 the company increased its dividend 31 percent to 23 cents a share to “return more capital to shareholders.”

Twenty-three cents a share may not sound like a lot but it cost the company $132m a year. Of that, $25m went into the accounts of the Ochs-Sulzburger family that controls the paper. The family rode that gravy train until November, when the dividend was slashed to 6 cents.

But the Old Grey Lady isn’t exactly sitting on a pile of cash like, say, Microsoft. While the family was collecting its dividend checks, the Times was trying (and failing) to slash its costs by about $140m a year, almost exactly the amount of the dividend.

The Times couldn’t right the ship, so it has been tapping $400m from its two revolving lines of credit to pay expenses, including the dividend. One of those credit lines is expiring in May and no one’s willing to lend these days. So the Times is now borrowing against its headquarters to pay the bills. (Mathis points out that technically, the Times isn’t borrowing but arranging a sale-leaseback, but I think that’s a distinction without a difference.)

The Times borrowed to pay its investors with money it doesn’t really have. Somebody please explain to me how this is different than a Ponzi scheme.